Every time I go to the grocery store, I check the mark-down meat bin. Whenever there is 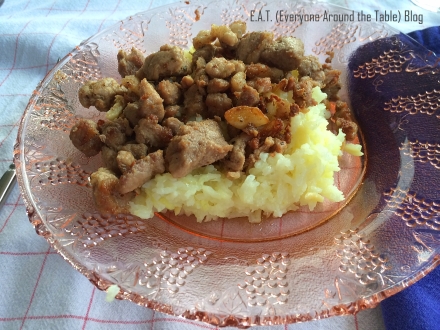 cubed pork on sale, I buy it because I can make either Pork Green Chili (I’ll have that recipe for you soon) or Pork Souvlaki. That’s the beauty of pork – it’s flavorful but also basic enough that it can adapt to different types of ethnic cuisine such as Mexican and Greek in this case.

One of my best tips is to buy a large pork loin (not the smaller tenderloin) from your “big box” store. I divide it into thirds and keep 1/3 for a pork roast, 1/3 gets sliced into pork chops that are very lean and 1/3 gets cubed – 3 meals from one bug hunk of meat!

Here’s how I make my family’s favorite pork souvlaki with rice. 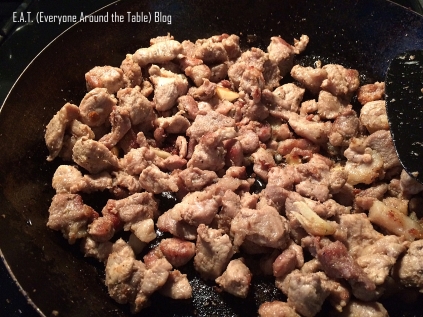 Method:
1. Put all of the ingredients including 1 tsp of the oregano in a zipper bag. Seal it and squeeze out the air. Smoosh things around making sure all of the ingredients get distributed well.
2. Put the bag ‘o pork in the fridge for six to eight hours. (You could prepare the bag before you go to work and then cook it for dinner). Don’t leave it much longer than 10 hours or the lemon causes the pork’s texture to get a little weird.
3. Drizzle some olive oil in a skillet and heat it up until the oil starts to shimmer. Carefully pour the contents of the plastic bag into the skillet. Distribute it evenly over the bottom of the pan.
4. Let the meat cook, turning it over with a large spatula, as it browns. If your pan was hot enough and you waited long enough before turning, the meat will turn over easily, will be nicely browned and you won’t leave a layer of nice meat crust behind.
5. As you are cooking the meat, sprinkle some more oregano over the meat, crumbling it between your fingers as you do to release more flavor.
6. If there isn’t any marinade liquid left in the pan, add a little more olive oil and lemon juice to make some liquid.
7. Finish off by adding a little more crumbled oregano. I do this often with herbs and spices because they change as they cook. I want multiple layers of flavor from herbs! Serve the souvlaki over the rice, being sure to drizzle the liquid over the combination.

To accompany the meal, make a nice Greek Salad with greens, tomatoes, cucumber and an olive oil/lemon juice dressing. The crisp coolness adds a nice counterpoint to the meat and rice. 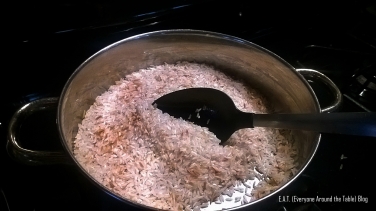 Every time I make rice, I make it this way, with rosamarina because it just tastes so darned good!

Ingredients:
1/4 cup rosamarina, also called orzo, found in the pasta section of the store
2 cups rice
4-1/4 to 4-1/2 cups water (or chicken stock)*
3-4 bouillon cubes (if using water instead of stock)

Method:
Melt about 1 tablespoon of butter in a pot. Add the rosamarina and stir almost constantly until it starts to brown. At this point, it will burn quickly so before that can happen, pour the rice over it and stir to prevent the rosamarina from continuing to sit on the bottom of the pan. The butter that’s still in the pan will lightly coat the rice/rosamarina, adding some flavor.

Add the water/bouillon and stir. Let the mixture come to a boil. As soon as it does, cover the pot, turn the heat to low and let it sit to start absorbing the liquid. This usually takes about 20 minutes so I try to time the coordination of making rice with making the entree so they are done around the same time. Resist the urge to lift up the lid or stir the rice because it will affect how the rice turns out.

* Normally, you would use twice as much liquid as rice. But because the 1/4 cup of rosamarina is over and above the rice amount, I increase the liquid. Start with 4-1/4 cups of liquid but then check the rice as it starts to absorb all of its liquid. If it isn’t done, add that other 1/2 cup of liquid. Rosamarina and rice cook at slightly different rates, which accounts for the variations in liquid at the end.

Drizzle a little olive oil over the rice – it’s so good that way!