One night, I was feeling super-ambitious and decided I was going to make crepes. What’s more, I was going to spread Nutella on them and have a little bit of heaven on a plate. As I made the crepes (which were a whole lot easier than I thought they’d be) and was stacking them between layers of wax paper, I realized that the stack looked like a multi-layered cake. That gave me the idea of spreading a thin layer of Nutella between each crepe to make a torte. 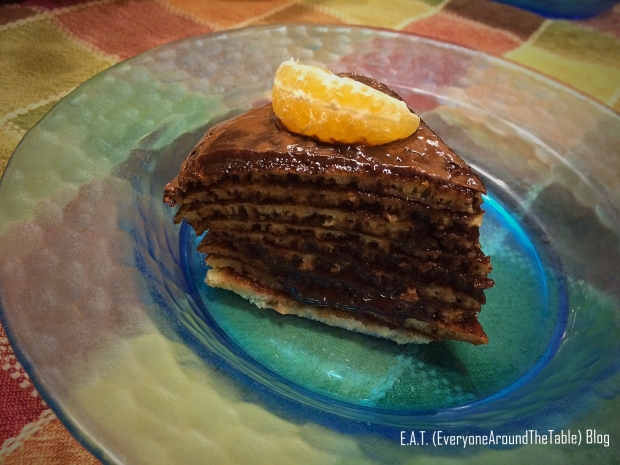 It looks like it took a very long time but this dessert comes together in about 15 minutes and requires no baking.

The family was so impressed by this pretty dessert that I decided to keep it in my repertoire of desserts to pull together in a pinch, but that look like I gave a lot of thought, time and attention to. Now it’s our little secret!

Don’t Tell Them It Was This Easy Nutella Torte

Variations: Nutella and jam flavor of choice or orange marmalade, alternating layers of chocolate and jam/marmalade.

Instructions
For the crepes, mix flour, sugar, baking powder and salt into a bowl.
Beat the eggs and milk until well-mixed and add to dry ingredients. Mix until smooth.

Melt 1/2 tsp butter in preheated (medium high) crepe pan or flat-bottomed thick pan. Pour 1/4 cup batter in the pan, swirling it quickly to evenly spread the batter around. (Note – it you are using a pan that is more than 8 inches, be careful how much you spread it. Without the limitations of the size of the pan, you could get unevenly-sized crepes which would mess with the look of a layer cake.)

Cook crepes one minute on each side. Immediately place each one on the serving plate, spreading it with the Nutella, not quite to the edge. Make the next crepe and place it on top of the other one, again spreading the Nutella. Repeat, layer after layer. While it’s helpful to have one person make the crepes while the other spreads Nutella, it isn’t necessary. Just move fast!

A torte in the making, layer by layer. The Nutella spreads beautifully over the warm crepes. Don’t extend the spread to the edges because, as the warm layers build, it will spread out a little more.

Finish off the top crepe with more Nutella or leave that off and dust with powdered sugar. Because this is so sweet, a pretty and nice foil is fruit, such as Clementine slices or berries. Toasted hazelnuts would also be delicious and add texture. Because the crepes are somewhat bland, think of them as a blank canvas between which you layer whatever sounds good!

Use a sharp knife to cut torte wedges like you would a layer cake. If you knife isn’t sharp though, it will just press down and make everything squish and slide – not pretty! The torte is even better the next day and is even good chilled.