Even though my children are in their teens, they still look forward to my annual tradition of making Pumpkin Pizza Pies on Halloween night. When they were younger, I made them as a way to make sure they had a decent dinner in them before heading off to trick-or-treat so that there was more than candy in their tummies by the end of the night.

When I announced that I was making the pizzas a few days early this year so that I could photograph them for this blog, they said, “but you’re going to make them again on Halloween, right?” It’s nice to have your kids actually request your cooking!

Start by making homemade dough which is a snap if you’ve got a good food processor. I’ve included my No-Fail Homemade Pizza Dough recipe for you.

Start by rolling out your pizza.

Next, you can make two large pizzas (the recipe makes two big rounds) or you can divide them up into personal pizza size. Here, I made four personal-size ones.

Don’t worry about the shape of your dough. Pumpkins come in all shapes, right? Well so do Pumpkin Pizza Pies! Trim a little bit off to be the pumpkin’s stem. After rolling them out on a floured surface, lay them on a cookie sheet misted with non-stick spray. Let them rest for a few minutes to rise a little. 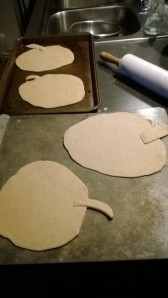 Cut pepperoni circles in half and some in quarters to make half-circles and rounded triangles. Spread pizza sauce on the pumpkins, leaving a boarder of crust. Add mozzerella cheese and then let the kids go to work decorating their own jack-o-lantern face with the shapes. You can also use sauteed strips of red, yellow or green pepper which would make wiggly eyebrows and crooked smiles. Let you imaginations run wild.

Using pepperoni shapes, the kids made their jack-o-lantern faces.

Bake the pizzas in a preheated 425 degree oven for approximately 8-10 minutes depending on how thin you made the crust. And don’t, I repeat, don’t answer the phone or the door like I did, leaving the timer beeping and the crusts getting just a tad too crispy. Everyone gobbled up their pizzas anyway.

Serve the spooky pizzas with lots of veggies to be sure to get some good stuff in the kids before they get to the “good” stuff from trick-or-treating.

And keep in mind, this idea of shaped pizza is certainly not limited to Halloween. I make heart-shaped ones for Valentine’s Day. Make up your own reason to have shapely pizza! But most of all, enjoy your homemade pizza, whatever the occasion.